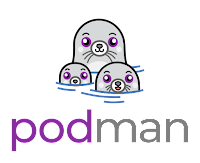 Podman (the POD MANager) is a tool for managing containers and images, volumes mounted into those containers, and pods made from groups of containers. Podman runs containers on Linux, but can also be used on Mac and Windows systems using a Podman-managed virtual machine. Podman is based on libpod, a library for container lifecycle management that is also contained in this repository. The libpod library provides APIs for managing containers, pods, container images, and volumes.

Podman vs Docker: All You Need To Know! | LambdaTest

Docker daemon is a background process responsible for managing all containers on a single host. It can handle all Docker images, containers, networks, storage, etc. Docker daemon uses a REST API to listen to requests and perform operations accordingly.

So, Docker needs this daemon to run in the background to manage, create, run, and build containers. Docker has a client-server logic mediated by the Docker daemon.

Podman, on the other hand, does not need a daemon. It has a (daemonless architecture), which helps users to start running containers (rootless). In other words, Podman does not require root privileges to manage containers.

How is Podman different from Docker? The most significant difference between Docker and Podman is that Docker uses a client-server architecture, where a daemon runs on every host that needs to run containers, whereas Podman uses a single-process architecture. Because of this, pods and images are smaller.