With new programming language popping-up from Apple, Google, Microsoft
and open source, there was never a batter time to learn new tools, and also to be confused for "uninitiated".

For example, language "D" used in Facebook for faster analysis of C++ programs.
Conversation with Andrei Alexandrescu: All things D (the language) | Charles | Channel 9:
The interview with this prominent languages expert mentioned LLVM and Clang
and used term "garden" for this great variety of programming languages.

Apple's new Swift language has a quite solid foundation.
Lead person of "tools and languages" in Apple now is Chris Lattner
creator of LLVM, is was awarded prestigious ACM award
In addition, he started one of the best C/C++/Objective-C compilers, Clang.

Then there are continuous improvement of mainstream languages
Plus there are many excellent "classic" open source languages, such as
And that is only languages... There are many frameworks, tools, libraries that are evolving quickly and new being crated... 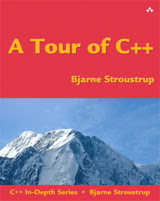 What is the best comment in source code you have ever encountered? - Stack Overflow:

referenced from:
Lessons from Code Reviews with Shawn Wildermuth @ .NET Rocks! podcast
Posted by Dragan at 10:53 PM No comments: