Inside Google's Secret Lab - Businessweek:
“Google X is very consciously looking at things that Google in its right mind wouldn’t do... They built the rocket pad far away from the widget factory, so if the rocket blows up, it’s hopefully not disrupting the core business.”

Book: The Everything Store: Jeff Bezos and the Age of Amazon

Book | Brad Stone:
"Amazon.com started off delivering books through the mail. But its visionary founder, Jeff Bezos, wasn’t content with being a bookseller. He wanted Amazon to become the everything store—a store that offered limitless selection and seductive convenience at disruptively low prices. To do so, he developed a corporate culture of relentless ambition that transformed retail in the same way Henry Ford revolutionized manufacturing."

Secrets of the Amazon: “The Everything Store” Book Excerpts are Now Out! | Brad Stone - Bloomberg Businessweek

Jeff Bezos - Wikipedia, the free encyclopedia
Posted by Dragan at 10:03 PM No comments: 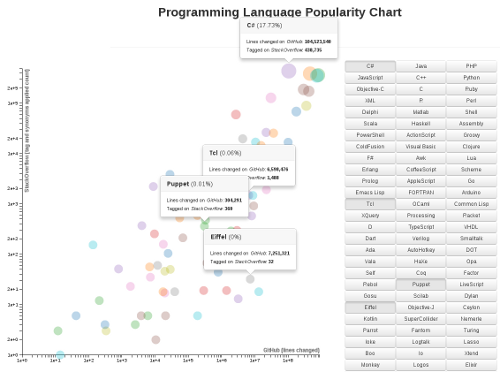 "interesting chart, giving a realtime view of which programming languages have high mindshare. The chart has one axis devoted to number of lines in code commits on GitHub, and another to how often the language shows up in tags on StackOverflow."

Posted by Dragan at 8:54 AM No comments:


The F# Software Foundation   vs.  The Scala Programming Language

An Unbiased Comparison of F# and Scala - Tim Kellogg
"Scala is a more approachable language than F# but F# has a stronger sense of type safety. F# also has a much stronger type inference system, which leads to less type annotations. Regardless, I think Scala will recieve a much broader uptake given that it has a much more familiar syntax to C/C++/Java/C# developers. On some level, I like to think of Scala as being more of “a better C#” than “like F#”. Each will have it’s uses, but I think Scala will go far because of that."
TechNeilogy: F# vs. Scala, My Take at Year Two:
"the choice of F# vs. Scala is probably determined by a single external factor: whether one is targeting the .NET ecosystem or the Java ecosystem. So the real-world debate is less likely to be F# vs. Scala than it is to be F# vs. C# or Scala vs. Java. "


Microsoft was supporting port of Scala to CLR/.NET,
but since release of F# that is not active anymore.
Scala on Microsoft .NET | The Scala Programming Language

F# is distributed with Visual Studio, and is also open source,
so it may already have more users than Scala, despite unusual F# syntax.

Posted by Dragan at 8:47 AM No comments: