Arete (moral virtue) - Wikipedia, the free encyclopedia
"Arete (Greek: ἀρετή), in its basic sense, means "excellence of any kind".[1] The term may also mean "moral virtue".[1] In its earliest appearance in Greek, this notion of excellence was ultimately bound up with the notion of the fulfillment of purpose or function: the act of living up to one's full potential."

"The man or woman of Arete is a person of the highest effectiveness; they use all their faculties—strength, bravery and wit—to achieve real results. In the Homeric world, then, Arete involves all of the abilities and potentialities available to humans." 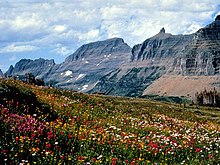 "The Garden Wall, an arête in Glacier National Park"

book review: The Way of the Fight | Brian Johnson

Arête: The Greek Idea of Excellence
"...the only reason for going to college that makes any kind of sense is the fuzzy notion that college might somehow, in some strange way, make us better, and that being better is a worthwhile thing in and of itself...
...we each have a potential that we can and, more importantly, should work toward realizing. In fact, most people agree that the best of us are those who strive to lead lives of excellence, who seek to perform at the peak of our abilities no matter the circumstances.
...
Greeks developed a concept known as Arête: 'being the best it is possible to be.'
...
...educated person is one who more fully realizes his or her potential for excellence, one who strives to lead an excellent life. "
Posted by Dragan at 9:06 PM No comments:

The Raspberry Pi 3 adds Wi-Fi, Bluetooth, and still costs only $35 | The Verge

The companies are teaming up to provide an entire package needed to build Internet of Things and smart devices, including hardware, OS and cloud services. The goal is to help Raspberry Pi 3 users take their envisioned devices from concepts to the end market.

Microsoft is previewing a new edition of its Windows 10 IoT Core operating system for the Raspberry Pi 3. With the OS update, Microsoft is making it easier to customize the OS to a specific device made using Pi 3.

Microsoft will also certify devices built around Raspberry Pi 3 to work with its Azure cloud services, the company said this week."

Raspberry Pi Leaps into 64-bit Computing with Model 3 @ InfoQ
Posted by Dragan at 12:55 PM No comments: