CyanogenMod's HP TouchPad Team Releases A Glimpse At CM9,
Hopes To Give Us "Something To Play With" Soon 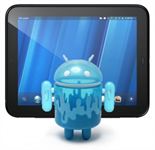 Android 4.0 ported to HP TouchPad
announcement by HP that it would be open sourcing its WebOS software has led to a surprise reverse phenomenon of developers now hoping to port the operating system to Android devices.

On the other side, both Android and WebOS should be able to run as a "Desktop VM",
to run "universal" apps on every computer... That sounds like HTML5 offline apps...
and for the most part it is, except that a platform (OS) should provide packaging,
updates, and protection services...
Posted by Dragan at 7:18 PM No comments: