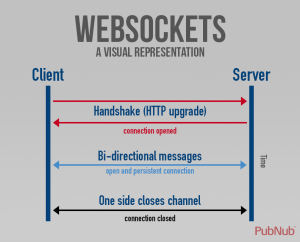 Here are some useful links about WebSockets and WebHooks, for .NET, GoLang, JS

Moving Data over the Web: AJAX vs. WebSockets vs. Webhooks

"HTML5 WebSockets allow your client-side JavaScript to open and persist a connection to a server. With WebSockets, data is exchanged as messages, which can happen very quickly due to the persistent connection.
...
powerful aspect of WebSockets is a capability called full duplex, which is a fancy way of saying that both the Client and Server can send each other messages

A Webhook is really just a URL that accepts a HTTP POST (or GET, PUT, DELETE). One server/service will provide another with a callback URL that it should push data to when it has some data to send. Any old web server can be used really."

"A webhook in web development is a method of augmenting or altering the behaviour of a web page, or web application, with custom callbacks. These callbacks may be maintained, modified, and managed by third-party users and developers who may not necessarily be affiliated with the originating website or application."

gorilla/websocket: A WebSocket implementation for Go.

A Million WebSockets and Go – freeCodeCamp
"Mail polling involves about 50,000 HTTP queries per second, 60% of which return the 304 status, meaning there are no changes in the mailbox."

aspnet/WebSockets: Implementation of the WebSocket protocol, along with client and server integration components. @ GitHub


How many system resources will be held for keeping 1,000,000 websocket open? - Stack Overflow

How do push notifications work? What is the basic concept behind them? - Quora

How does push notification technology work on Android? - Stack Overflow


Messaging in Distributed Systems - What's the Deal? - The Static Void Podcast
Posted by Dragan at 9:19 PM No comments:

If you want a laptop you can count on. You Chromebook. [Extended] - YouTube

Reader question: Does the Pixelbook use eMMC or SSD storage? (Answer: It depends) – About Chromebooks
Posted by Dragan at 8:13 PM No comments: