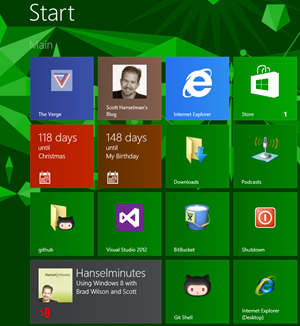 "Windows Azure Mobile Services makes it incredibly easy to connect a scalable cloud backend to your client and mobile applications.  It allows you to easily store structured data in the cloud that can span both devices and users, integrate it with user authentication, as well as send out updates to clients via push notifications."

"You can also move apps into different columns, with noticeable space between adjacent columns. Just drag an app’s tile horizontally and you will see a gray bar appear in the direction you are dragging it. Drop the tile on that gray bar and it will get a column of its own, into which other tiles can then be added the same way to make a group of apps."

"There is no general shortage of Web addresses. If there were, we might have seen businesses flocking to other new domains ICANN has already introduced over the past decade


What amazing new benefits will all this spending bring to consumers? None whatsoever, at least in the eyes of venture investor Esther Dyson, who served as chair of ICANN from its inception in 1998 until 2000. Dyson once supported the idea of allowing companies to create arbitrary top-level domains, but she says she came to believe that the change would be unnecessary and confusing for the public. "

Posted by Dragan at 7:14 AM No comments: