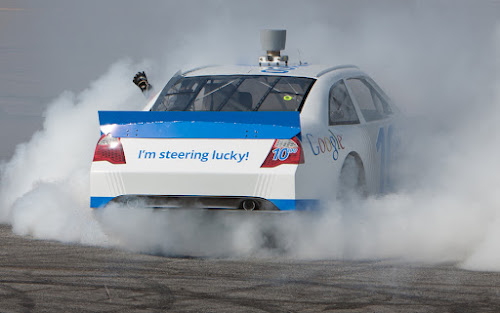 "...We think the most important thing computers can do in the next decade is to drive cars..."
- Sergey Brin, Co-founder
...
Google Racing will mark another step along this path,
...
Update Apr 1, 10:05 a.m.: As you probably guessed—no, Google Racing isn’t real.
We were really happy to work with NASCAR on this April Fools' joke.

Computer: a bicycle for our minds

A story by Steve Jobs:Thank You, Steve - CrumplePop Blog
“I read a study that measured the efficiency of locomotion for various species on the planet. The condor used the least energy to move a kilometer. And humans came in with a rather unimpressive showing about a third of the way down the list. It was not too proud of a showing for the crown of creation. So that didn’t look so good, but then somebody at Scientific American had the insight to test the efficiency of locomotion for a man on a bicycle. And a man on a bicycle, or a human on a bicycle, blew the condor away – completely off the top of the charts. And that’s what a computer is to me. What a computer is to me is – it’s the most remarkable tool that we’ve ever come up with, and it’s the equivalent of a bicycle for our minds.”
– Steve Jobs

Longer interview in Forbes
(answer to What drives Steve Jobs? Cringley: What’s your passion? What drove you?)

Compared to Windows 7, new Windows is visibly faster on slow computers.
There is one issue that is a "show-stopper": Metro style requires min 1024x768 screen resolution,
and many of netbooks have less than that (600 or 720 vertical resolution was typical).
Here is lengthy explanation for this limit by Microsoft Windows Boss Steven Sinofsky. He seems to be quite 'technical' and cares about the product...

Anyway, there is also a "hask" to solve this resolution issue:
Intel graphics driver has option to enable higher resolution than physical,
and after this Windows 8 is happy to show Metro style apps...
(Note: make sure to manually update the driver, since installer will declare OS 'not supported')

Still, compared to tablets, such as iPad, TouchPad and Androids,
Windows 8 is just not the same experience...
it takes time to start, apps are not as prompt...
So, Windows 8 is better than Windows 7 for desktop,
and have yet to see how "pure" Metro works on ARM devices...
Posted by Dragan at 3:35 PM No comments: