Google also purchased more than 1,000 patents from IBM in July

While it is clear that Google does need "arms for the patent war",
it is a good question if a fraction of the same money was invested in people,
engineers around the world, how much better outcome would be?

Here is an fascinating, related story about Patents on "This American Life"
THE most popular (listened) podcast.

It is about "Intellectual Ventures", that owns 35,000(!) patents,
much more than Microsoft, Google...
and making all money on licensing and patent litigation...
There is even a trancript of the podcast, for those who like more to read than to listen :)

Now, guess who is on track to become another patent super-power... 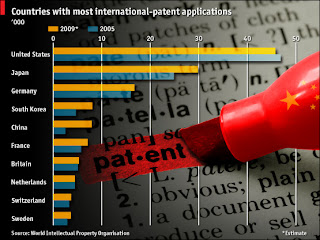 Number USA patents per year is on decline, and China is dramatically increasing number of patents...
Posted by Dragan at 1:51 AM No comments:

Disrupting Class: How Disruptive Innovation Will Change the Way the World Learns


"Dr. Christensen argues that the traditional government-run education system will in the near future be 'disrupted' by the innovation of computer-based learning. At first, online learning will compete against nonconsumption by offering classes in subjects where there isn't enough demand in any given school to justify offering a traditional course (such as a very advanced math one or an unusual foreign language). But eventually, He believes that the technology will improve such that computer-based learning will render the traditional model of education obsolete.

In 'Disrupting Class', he postulates that demand for computer-based high school classes will follow an S-curve that will start to 'flip' (significantly accelerate) in the year 2012. In the years between 2012 and 2018, Dr. Christensen projects that the share of online courses will grow from 5% to 50% of all high school courses. That timetable seems a bit ambitious to me personally, but I believe he's got the basic right idea about the growth in the demand for online classes.

Posted by Dragan at 1:30 AM No comments:

6th Paradigm: "everything as a service" (cloud computing)

Another "gem" podcast from IT Conversations
... won the "Most Insightful Speaker" Award on eComm ...

Since the first one of the modern era, which was the Industrial Revolution, she posits that there have been five. Each of these revolutions is accompanied by a set of best practices. The economy, the society, and the institutions need to adapt to this revolution they change. You get interesting affects in terms of how the economy diverges from the financial markets and a lot of this, again skating over it, has to do with the fact that technology tends to move exponentially or adoption of new technology moves exponentially whereas our social and cultural institutions move linearly. There is a divergence and it takes us time to get our heads around the way the world will work in this new paradigm. She calls it a "techno-economic paradigm".

Here are the five that she's identified:
* Industrial Revolution,
* Steam and Railways,
* Steel/Electricity,
* Mass Production, and the last one is
* the Age of Information and Telecommunications.
My thesis is that we're coming to the end of that fifth paradigm and we're about to enter the sixth paradigm
...
What will drive the sixth paradigm?
* cloud computing - cloud computing may be a catch phrase, but ubiquitous computing storage might be the technology that drives the sixth paradigm, where you have "everything as a service".
...
Another factor driving the sixth paradigm is what I call "exchange ubiquity". I didn't really have a good catch phrase for this. Exchanges (marketplaces) are now everywhere...

Posted by Dragan at 1:11 AM No comments: