A new word invented by Google people...
"PRE" is from "preview"... instead of "PRO" from "product"
That is, make a quick preview quickly to try, rather than slowly final product.

...
pretotyping is a way to test a product idea quickly and inexpensively by creating extremely simplified versions of that product to help validate the premise that "If we build it, they will use it.
...
The best way to explain pretotyping is through examples, so let's look at one.
Below is a photo of Jeff Hawking's pretotype for the Palm Pilot:

The founder of Palm Computing mocked up a Palm Pilot with wood and paper; then carried it with him for weeks pretending it was a working device. His objective was to learn if he would actually use such a device before going to the next, very expensive and time-consuming step, of building an actual working prototype.
...
Fail Fast ... and Often

Pretotyping is an approach to developing and launching innovation that helps you to determine if you are building the right it before you invest a lot of time and effort to build it right. Pretotyping helps you to fail ... but fast enough and cheaply enough that you have time and resources to try something different. 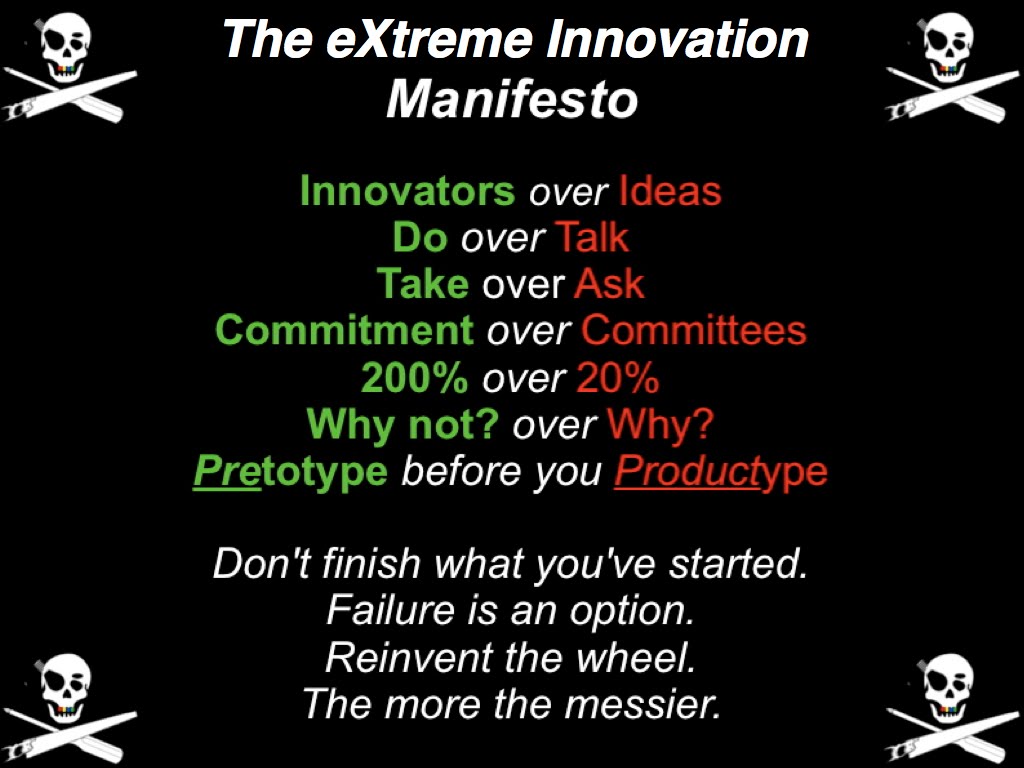 "The XIM is a set of actionable principles designed to fix what ails corporate innovation."
Posted by Dragan at 11:56 PM No comments:

"The problem is that the social networks we're creating online don't match the social networks we already have offline,
...
Circles deal with this situation directly, and they're central to how Google+ works. You can add others to circles for family, friends, coworkers, neighbors, classmates, or whatever other categories are desired. You can share a Google+ post with specific circles or publicly. Adding a person to a circle doesn't require their permission, making Google+ similar to Twitter in this regard. You're the only person who knows which people are your circles.
...
Facebook was an all-or-nothing affair--people were on your friends list or they weren't. Last October, though, Facebook introduced a new groups feature that let people communicate only with various subsets of their friends. The feature isn't as obvious as Google's circles, though."

Presentation: The Real Life Social Network v2
Posted by Dragan at 9:11 AM No comments: